Its a love/hate thing 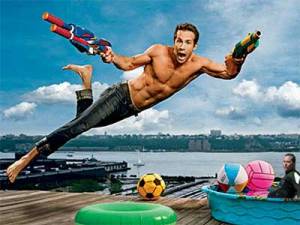 I had an interesting talk with my friend the other day. We decided the world needed to change a few things. First of all,we have waited long enough for transporters. Seriously, they were using those way back in the early years of my life (70’s?) on Star Trek. Why don’t we have them yet for the general public? I’m pretty sure they worked out the last few bugs in the program on Galaxy quest so….let’s go already! I’m tired of driving all over town every day….and especially tired of paying for gas! Sign me up! (I’ll go second….just in case…)

The other change we feel would be in the best interest of all peopler (us) would be this: Whenever someone did something nice or selfless for another person/cause, they would increase in beauty or fitness. Just think about it….how would the world of Hollywood change? I’m not saying that all those ubber wealthy movie/TV stars are selfish…….I certainly don’t know any of them personally. The only real “star” I’ve ‘met’ besides Frankie Muniz, was Kevin Costner. And I can’t even say it was really a ‘meeting.’ He was at the same park we were at in California….he was running around with his kids, shirtless….., and he and I left at the same time. I got in my van to move it and he decided to run OVER my tiny white van with his mammoth SUV. He ‘pulled out’ at the last moment and gave me a cute little smile and wave. I’m sure he was trying to tell me that, alas, he wasn’t going to run over me after all, poor me…but I shook my fist at him anyway. (ok, I didn’t actually shake my fist…)

I think about poor little worn out Mother Theresa and wonder what she would have looked like if this were the real payoff to being selfless. How affective would she have been in those third world countries if she had looked like a centerfold model? hmm…..But then, the mind has to pursue the notion and think about how it would work. If beauty and firmly toned abs came from helping others, would those things no longer be so desired? If we got them without trying, would they be less important? It makes the head spin a bit.

I don’t know if it would work….maybe I’ll try it out when I create my own world….(LOL) I think that the truth is this is really already the case. Those people, like Mother Theresa, are incredibly beautiful on the inside. They may seem worn out an a bit shriveled from all their giving and caring, but when they get were they are going, I’m pretty sure they are the ones that are going to shine, like a star…..cause I said so.

2 thoughts on “Its a love/hate thing”