days of whine and football 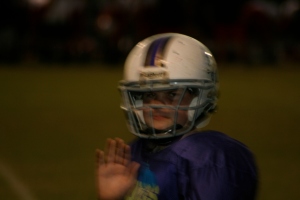 My kids are not well known for their ability to stick with things. It is a hard thing to admit, but very true. It all started with my firstborn. She was only fifteen months old when she decided she had had enough of wearing a diaper. I was a young naïve mother that had gone ala natural with my number one. She ate all natural foods and wore cloth diapers. After almost a year and a half of carrying a diaper bag filled with wet diapers that weighed just under three tons, I was overjoyed at the thought of a potty trained child. It didn’t hurt that my niece who was only a year older than my daughter was not yet potty-trained. This was my chance to prove my superior mothering skills to my sister in law.

I bought Maegan panties and got a potty chair and started planning my triumphant reveal. We would have to do it when all the family was together. They would be so amazed at my awesomeness that they would ask me to potty train all the forthcoming children on both sides of the family. Heck, I might even start charging and make a business out of it. I was so excited and just a tad over confident.

Maegan did great for a few days. She loved being free from the big bulky diaper and would even run around naked at times.  I tried to discourage the nudity, but loved the decrease in laundry. I didn’t have to do much more than ask her now and then if she needed to go potty and she would go. I still put her in a diaper at bedtime but she would rip it off at dawn’s early light and reach for the panties. Life was  good.

I had started bragging to my family when it happened. I don’t know if she decided she didn’t care or if she lost all feeling in her bowels, but Mae just stopped trying. She no longer wanted to sit on the potty and she would constantly have wet pants. I wasn’t about to give up so I started bribing her and using all the tricks and tips I could find. I even tried spending an entire day with her in the tiled kitchen with only books, a potty chair, and gallons of juice. Juice was a special treat so she loved it! But she still managed to not pee in the pot. Anywhere but in the pot is where she would go.

This began a long, drawn out process of my potty training. That is, Maegan trained me to watch her every move and anticipate any potty like behavior so I could strip her and toss her up on the toilet before she had an accident. It seemed the more trained I became, the more she wet her pants. It was horrid.

By the time my second child was ready to start potty training, I had resigned. I refused to potty train ever again.  I was worn out! When he was three, he came to me and informed me he was not wearing diapers anymore. I told him good luck and walked away. He didn’t have a single accident. Lesson learned.

As my children got older, things naturally changed. Instead of playing Legos and watching Disney all day, they morphed into creatures that could actually do things of value. Chores are a wonderful idea. How amazing that some moms don’t actually have to do everything to keep their homes in order. You noticed I said “some.”

We had a family meeting and planned out our responsibilities. It was going to be great. Everyone would have a job and when they did their job they would earn tickets. The tickets could be used for computer time or television time or even time with friends. I was excited to have the help and the kids were excited to earn some privileges. Little did I know…..

The plan worked great for a while, until I noticed something odd. Certain chores were not getting done and some people had stopped working all together. It was a mystery to me. We called another family meeting to discuss our progress in the program. It seemed that some people had decided they didn’t need to earn privileges. They were perfectly happy not having television or computer time because doing chores was just not worth it. Another child had earned enough tickets to ‘buy’ a play date with his friend so he didn’t feel the need to earn any more. And then there was the black market trading. Yes, my children somehow learned at a young age how to coerce and manipulate to get what they wanted without actually having to work for it. It is a gift. We tried several more chore reward systems over the years. Some will work for a while but they all seem to fall a bit short.

I have to say that when Ethan started asking and then begging to play football I was a bit hesitant. The big boys had played football at his age, kind of. They had signed up, gone to a few practices, told me that ‘football is in my blood’….and then quit. It was so frustrating to have to tell a football coach that called that my son didn’t want to be quarterback. I think the man cried. I didn’t want to go through that again. After about eight months of football talk tho, I finally gave in and signed him up for a local tackly league. Because of his size, he was able to play with the junior high boys even though he was only in sixth grade. He fit right in. It was fun to go to the field sometimes four nights a week and watch my boy run and run and run and eventually get quicker and stronger. I enjoyed ease dropping and talking to the other parents. I especially enjoyed when the weather started to cool off and we had evening games instead of hot noon games.

Ethan learned a lot about football and I learned even more about my kids. Even though they were born from the same parents, ate the same kind of food and grew up in the same house, they are not the same. They are all individual, unique people. They are all wonderful in their own special ways. Ethan happens to be the kind of kid that a mother dreams of. He is sweet as can be, follows through on what he says he will do, hugs me at least once a day, looks out for his little brother and has an awesome sense of humor. Before you think he is perfect, I have to say he can lose his temper easily and has a natural aversion to a clean room. But, those are things I can deal with….cause I said so…..

2 thoughts on “days of whine and football”

launches a project every month