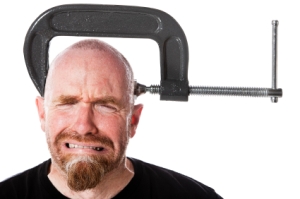 I woke up with a splitting headache. You might think that would signify a really good Friday night. Unfortunately, I don’t have those kind of Friday nights. Or maybe, that is fortunately….. Anyway, I woke up with a headache that not only didn’t want my eyes opening, but also wanted to push everything from my stomach. Purge everything! It was saying.

When I have a headache, I like to think I’m like most people in that I want to kill things. There is something about having excruciating pain inside your brain that makes you want to lash out and scream and shout. Maybe, the subconscious thinks the energy causing the brain melting pain will channel out through loud words, threats, and other mean mommy activities, thus releasing the pressure. Maybe.

All I know, is my kids all hate me today. I woke up in pain, the kid I woke up early to drive didn’t get up, my house is a disaster, and I’m all alone. It’s like a triple layer cake of poo. It might be big and impressive but it will most likely kill you.

A lot of the stress and frustration I’ve been feeling is related to time. I think that when Brad died, my brain came up with some sort of time schedule based on that and other events. I think our brain does that. It takes past events and bases our endurance and expectations on what happened then. Looking back, I think my brain kind of thought of Brad’s death as a long business trip. He had been gone for months before,working in other states, so I think my brain expected there to be an ‘end time’ for this separation as well. I also think that my brain decided I was only going to be around a while. I couldn’t really see past a few years in the future. That might sound morbid, but it wasn’t a conscious feeling of impending death or anything, just a ‘do this for now’ kind of feeling.

I’ve been alone for almost six years now. I’ve had many opportunities to change that, but I think I was afraid. Afraid that Brad would come back (lots of dreams about that), afraid I would make big mistakes, afraid I’d be happier than I should be, afraid of getting trapped….lots of fear.

I realized a couple things today. First of all, I realized that since I’ve been alone 6 years, I can’t really blame Brad for the miserable mistakes I’ve made with my kids. I also realized that six years is almost 1/3 of the time I was with Brad. Every day, every week, every moment is adding up to more and more time alone.

At my writers conference, I thought a lot about what I wanted to do and why and what my end goal was. I honestly don’t know. I feel like I’m just doing. Doing what I have to, what I need to, and now and then what I want to. But I don’t know where I’m going. Does that make me seem sad and pathetic?

Add to that picture the fact that I am sitting in my darkened closet, in my pajamas, with tears on my face, head pounding, writing this post after my daughter told me she hates me. If I’m not completely sad and pathetic now….I give up. Cause I said so.

One thought on “Blue Widow”