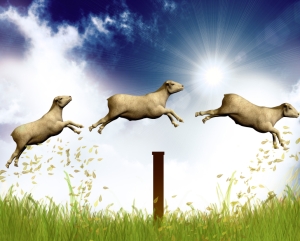 “It’s three o’clock in the morning, and I can’t sleep cuz it’s boring.”….is that how that song goes? I don’t know. Lyrics escape me sometimes. I find myself making up whatever fits with the tune and those become the words. Prime example is a song by Rocket to the Moon that doesn’t actually say “my eyes are no good filled with butter…” but rather “my eyes are no good, blind without her….” you decide which lyrics are better. I’m voting for butter….

I heard an REO Speedwagon song on the radio the other day, a song I have listened to for…..I don’t know, 20 years or so? I finally, FINALLY understood the lyrics. They were pretty great too. All this time I thought they were saying something completely different. huh. Go figure.

Do you find yourself filling in meaning and even words when people talk and you don’t really hear what they say? I think we all do that. It might come from laziness, or it might come from just being embarrassed that a. we weren’t really listening, or b. we are deaf. Or, in some cases, it might be both. Double whammy.

I have to admit that there are some people I ‘talk’ to that I find it better to not really listen to every word they say. The main reason for this is that they are crazy. I’m not being rude or anything, I’m being totally serious. They don’t know they are crazy, and I’m not going to be the one to break the bad news ( maybe I am….) but, if I were to listen to every word they said I would most likely go mad myself. And seriously, as much as the Hatter might think we are all mad and it’s a good thing and all that…I kind of prefer my reasonable level of sanity to total out and out madness. Just saying. I’m comfortable with my demons most days.

So, I really am awake at an ungodly hour and it kind of pisses me off. I was SO tired last night. I was falling asleep during Studio C…I know, what?! I went to bed fairly early, and only played on my tablet until around 11….so, you’d think I would be primed for a long, restful night. Apparently, somewhere in the cosmos there is a plan I am unaware of that states I needed to wake up at 3am for no obvious reason. I laid there for a while, thinking about sleep and how nice it is and how much I wanted to return there and doing all the things I know of to convince my brain to hibernate, but it didn’t work. I got up and covered up every single light from my computer, router, speaker, printer, etc. until it was pitch black. I didn’t stub my toes, and climbed back in bed. Nope. Not happening.

I tried reading boring posts on Facebook…but all my friends are fascinating. I tried Pinterest, but that made me hungry. I tried playing my word game but that only took me 32 seconds. Finally, I got up and wrote some more on my latest book. It was kind of poetically judicial. My main character has insomnia. Huh….am I becoming my character? Or is my character me? Heaven forbid. The only way she gets some sleep is when she….hold on there….no spoilers!! Cause I said so.