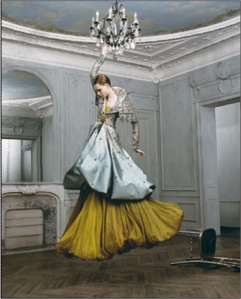 Well, it’s come to this.

Google has failed me, kind of. As you may know, every time I make a blog post, I attempt to add a thought provoking, meaningful, and somewhat original picture to my post. It may or may not have anything to do with the post.

Today, after of playing a rousing game of “the Game of Things” with the crazy writers at Pemberly last night, I really wanted to post a picture of someone hanging from a chandelier. Why you ask? Let’s just say there was a lot of talk about a certain Hugh Jackman, dressed as Wolverine, hanging from the amazing chandelier in the solarium where we played.  I was somewhat dismayed at the lack of pictures Google gave me to choose from. In fact, there was only one picture of a ‘party chandelier hanger’ in the whole two pages of pictures. I would have posted that one, but I wasn’t sure if the black man was actually wearing any sort of ‘pants’ under his open smoking jacket. I would hate to offend….

This gal will do for today. It actually came down to a choice between her and the chandelier MADE from people’s bones. Can you say….”disturbing?”  Since I am currently residing at ‘Pemberly” for my writers retreat, I decided her dress made her the winning candidate.

The weekend has gone swimingly well. It could only have been improved if we actually had a pool to ‘swim’ in. Many words have been written and stories have been shared. It is amazing to me how creative some people are. I had a close call with the evil demon of discouragement Wednesday night, but I came out the victor in the end and have persevered. It was tough going for a while….not really knowing what direction to go with my story.

It is a bit like giving birth….if we were actually able to custom make our kids. Think about that…if you could choose your child’s strengths, weaknesses, talents, failures, trials, and even personality. What kind of person would you make them? In a story, if you make someone ‘perfect’, with no trials or heartache….you have no story. Nobody would want to read a story about someone that never failed, got hurt or made a bad decision because there would be no story.

It makes me think about my own life and the life my kids are leading. Sure, sometimes I wish they didn’t make the choices they make or they didn’t have to be sick or hurt ever, but maybe not. Life without any trials is no life, just like there would be no story.

We are all here to live our own story. I am here to write my story….well,not MY story, but the story that has begun to brew in my brain. I think it will be okay. I don’t hate it, it makes me happy, and so far no one has told me it is crap. I did have a moment of reckoning though…..one of my characters is supposed to die at the end. That is the very reason I hate Nicholas Sparks. Have I gone to the dark side already?? I’ll have to really think about it before I let the bullet fly……cause I said so.

One thought on “cry wolverine”