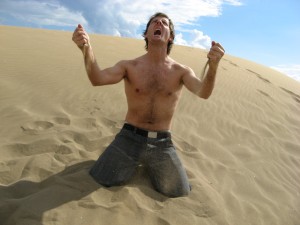 I got a knife stuck in my head today. Not a real one, but rather an invisible one that could only be felt by me and only by the me that was inside my head. I’m not sure where or when I received the ‘stick’ but I felt it during sharing time in Primary today. I didn’t think I had any enemies at church so I was a bit surprised when I felt the knife enter my skull

I didn’t eat a big breakfast so maybe that was the cause of my pain. Okay, I admit it…I didn’t any breakfast if the reese peanut butter cup doesn’t count. Since it isn’t “real chocolate” I figure it doesn’t count. I thought that maybe it was the lone ‘cup’ that was giving me pain because he was lonely so I ate a few of his brothers but, alas, it did nothing to counteract the searing pain that was now leaking out the back of my skull and making it’s way down my shoulder and over to my spine.

I found a bit of relief when I excused myself to the hallway to gossip with the ‘ladies who walk the halls.’ Nothing takes your mind off a bad headache better than hearing dirt on others. There wasn’t really any gossiping going on but I did manage to scare a young mother by telling her she had grey hair that could only be seen by looking at the top of her head. heehee…Yes, I’m evil, but it was purely for medicinal reasons. My head felt a bit better after scaring her and I did end up telling her I was kidding.

I remember the first time a hairdresser told me I had a ‘small patch of grey hair’ on the back of my head. I’m pretty sure I scared her with my “NO I DON’T!” reaction…scared the grey hair as well apparently, it disappeared and she could never find it again…..

I didn’t start coloring my hair until about two years ago. What can I say? I was talked into it by my sexy hair dresser. Yes, he was a man….sheesh! I did like how my hair looked with a nice dark wash on it but I hated how I had to keep getting it colored to avoid that ‘stripe’ that comes down when the hair grows.  I also hated the money I was now spending on my own hair. Seriously, I used to go YEARS without cutting my hair. When I was in the midst of child production, those 9 years when I was either pregnant or nursing a baby, my hair got really long and luscious. Of course, having little ones and no energy….I did nothing to it but wash it now and then and wear it in a braid. It was too heavy for a pony tail and too ‘in the way’ to wear down so….no matter what I tried, it ended up in a braid every day.  My hair was amazing…..

When I moved to the south east, I decided to cut it off a bit and it has been shorter ever since. Not ‘short’ as it still is past my shoulders, but definitely shorter than the butt crack length it used to be. Living where it is humid is not always a fun place to have long hair or any sort of ‘style’ to your hair. I ended up resorting to perms to let my hair just ‘be’ and not have to worry or mess with it much. It worked for me and believe it or not….the curls kept me from seeing grey as well.

The last time I went for a hair cut, about two months ago, I decided I didn’t want to color anymore. I didn’t have a lot of grey and I opted to pay for my daughter to get her hair done. She likes to dye her hair red and it looks pretty amazing on her.

The other day, I was in fixing my hair and realized my hair is not going to cooperate with my desire to not color. Apparently, the lack of coloring chemicals has acted like the lack of exterminating. My few grey hairs have multiplied into a small, growing community that will soon take over if the over lord does not rule with an iron, or colored, fist. Looks like I’m giving in and going in for color again. Sigh…getting old sucks. Cause I said so.

2 thoughts on “Henderson out”

writes a short story every week