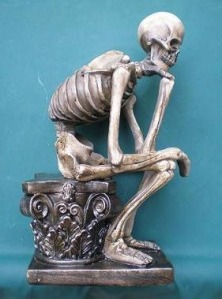 I read an article yesterday in one of those health magazines.  The magazine is called Whole Living and I am not sure where it came from. I get it in the mail each month and usually glance through it half heartedly before I put it in ‘the pile’ and eventually throw it out. Yesterday I actually sat down and looked at it while I ate my incredibly healthy lunch of pepper jack cheese on super whole grain crackers (that almost broke my teeth) and sliced turkey breast.  The article I found was very short, only a paragraph, and not only had pictures, but was actually printed over a picture.

The article is called “write off the pounds” and it talks about how writing about something you really care about can not only make you happier but also slimmer. I don’t know if I believe it…but it says that a study showed that women that were frustrated with something in their lives were able to lose 3-4 pounds over about three months after a ‘meaningful’, one-time writing exercise on a personal topic for 15 minutes. The study also said that women that wrote about something unimportant actually gained three pounds.

I have a few issues with this. First off, ‘3 pounds’?? I lose and gain that regularly, week to week. I don’t see that as a huge weight thing. Maybe for my baby sister it is since she only weighs about 50 pounds, but for the rest of the general, normal sized population….is three pounds over three months really a noticeable thing? Also, it says this is all based on a ‘one time writing exercise.’ Does that mean if I write for say….four hours on something important to me I will lose 48 pounds? On the flip side, if I write slobbering dribble will I gain 48 pounds? This could really be important on a bigger scale. I need to know if all these posts on my blog about things that are incredibly important to not only me, but mankind…could actually be keeping me at my current weight. Maybe that is why I am able to eat a pound of m&m’s in one day and not gain weight….simply because I wrote something profound?

I am kidding of course. I never eat a whole pound of m&m’s in one day. I usually takes me at least two or three days to ingest that much chocolate. Unless of course, I am stamping. In that case, my tolerance to chocolate goes way up and I am able to eat until I pop.

I do think there is something to this. In spite of my snarky attitude. I think that women in particular are really good at taking our stress bottling it up inside. That stress is what I refer to as a ‘hoarder’. It doesn’t just sit in the back of our mind and rest quietly, oh no. It collects things like fat cells, and hides them all over our body. When we do something to take away that stress, like writing or even therapy, it opens the door and lets a bit of sunshine in on that hidden area and some of the collective hoarding is let loose.

Maybe this is why all the big, beautiful celebrities go to therapist. It isn’t that they really need the mental help, it is part of their weight maintenance program. Golly, if I can count a verbal vomit or writing exercise as a trip to the gym this week….I’m doing it! Cause I said so.

2 thoughts on “Bob’s your uncle”