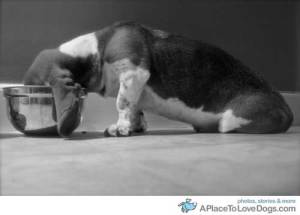 Cats are picky. You know I’m right. There is a huge difference between dogs and cats. Dogs will eat anything that they can get into their mouth except broccoli and pickled jalepenos (yes, I’ve tried), and cats will turn up their nose if their turkey isn’t deboned. When I was a fairly new wife, I made a turkey for dinner. I’d helped my mom make lots of turkeys over the years and I had even made a few since getting married. This turkey was different though. I decided to cook it without any stuffing. I didn’t realize that a turkey will cook a lot faster with a cavernous empty void in it instead of three pounds of cubed bread and celery and a stick of butter. I put the turkey in the oven and timed it to be done when we got home from church. Oh, it was done alright. If you have never had turkey jerky….don’t try it at home. The meat was so dry and tough we could not eat it. I put it out for the cat thinking, surely the cat will be excited to eat a whole turkey himself. He (Hobbs) was not impressed, and ended up literally turning up his nose and walking away in disgust. I was a bit shocked, but learned a valuable lesson. Cats are not dogs. Cats actually have standards.

My dog is pretty amazing. She is the best dog I have ever had (as an adult) and I am constantly being threatened by friends and strangers alike, that she is going to be stolen. I didn’t want a dog, but got her for my husband for his 40th birthday. All he wanted was a dog……(insert puss in boots face here) so that is what I got him. She was not the first dog I picked out, but she made it pretty clear she was the one for us. She has been really great. I don’t think I will ever get another dog after her. My odds are against me. I think I’ve had seven dogs….and only one has been a good fit.

Like any dog, Fantine will eat anything (except the above mentioned items) and not bother to taste them on the way down. It was great at first…having a sweet, soft, self powered vaccuum cleaner for the kitchen floor. Lately it seems I can’t leave as many ‘tidbits’ around for her. Whenever she eats anything that is not her ‘dog food’ she ends up throwing up or making a mess from the other end…and usually on the carpet or couch. It is really sad. I can’t even give her a bone from dinner. She will be sick from it.  How sad would it be to never get to eat anything different, your whole life? What if you only got to eat green bean casserole for every meal, every day, forever? My sister makes a pretty fantastic green bean casserole, but darn it…..I’d even get sick of that if it was all I got to eat forever.

I feel bad for Fanny, and some times I break down and give in to those big pleading eyes and give her a snack….but I always regret it. She will always leave me a little thank you present during the night. Sometimes, getting a thank you isn’t the best etiquette…..cause I said so.

One thought on “dusty bottoms”