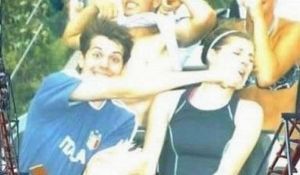 We don’t always celebrate birthdays on the day that they fall. In fact, in our family we tend to rarely celebrate them on their actual day. We like to get the whole family together and eat and play and make somewhat of a big deal out of birthdays.  My son Ben’s birthday has been no exception. His actual birth day was last Thursday. We did have a small family celebration that night, but we also went to the movie Friday and then had some family over the following Monday for more celebrating. It makes our birth days seem like more of a birth week at times.

I had made a cake for his actual day so last night I thought it would be fun to make homemade ice cream. We haven’t done it for a while but there really isn’t much to it. I just threw a bunch of half and half, sugar, strawberries, and one can of condensed milk into the ice cream maker and started it spinning under the ice. I thought I was really doing well. I started the ice cream before we even started the barbeque. For once, we would have finished ice cream without having to wait hours!

The barbeque was great. We ate our fill and then checked the ice cream. It was still happily spinning away….with no signs of slowing down. For those of you that may not know, that is how you know your ice cream is ready. When the maker starts having a hard time turning or it stops all together. My dad has been making ice cream a lot longer than I have so he came to assess the situation.

Now, I am the kind of person that doesn’t sweat the small stuff. I tend to just let things work out. When I am cooking, if I happen to actually be looking at a recipe and I don’t have an item, I will either leave it out or use something that I think would be a good replacement. This has worked pretty well for me throughout my life. I have even discovered some tasty alternatives along the way. When we started the ice cream, I found that I didn’t have any rock salt to put on the ice so I figured epsom salt would work just as good. I even vaguely remembered using it before so…no worries. Apparently….worries. That ice cream never did set up.

After having the darn maker churn away for at least two hours, I decided it was a futile effort. To justify my next move, I’d like to tell you that I regularly eat cake battter, cookie dough, muffin mix….etc.  When I brought the still runny ice cream in, I figured….runny ice cream is the same as a milk shake. Right? So I got all the kids a cup and poured them some ice cream. It was tasty to be sure. We finished up and I sent the kids to bed. All in all, a very nice night.

Long story short….runny ice cream is not the same as a milk shake. I had stomach cramps only comparable to the time I had food poisoning and Ben ended up throwing up. I guess I learned my lesson. From now on, I’m going to leave the homemade ice cream making to my dad or sister OR….I just may break down and buy some real rock salt….and find a recipe. Cause I said so.