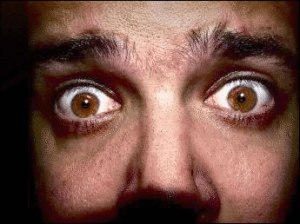 I don’t like scary movies. I don’t enjoy feeling that kind of panic and the lack of control that comes with things jumping out at me on a movie screen. The last ‘scary movie’ I think I saw was actually called Scary Movie. It was a parody of lots of scary movies from the year/s before it was made. Some of them I recognized…some I didn’t. I don’t usually watch them. I know the movie was actually supposed to be funny, but I still found it frightening.

My sister is my oposite here. She loves scary movies. Although, she made it clear today that she does not like to GO to see them. She doesn’t like watching movies in the theater. I had to ask for reasons because, I love going to the theater! She doesn’t like it because : she can’t lay down, she can’t pause it to go pee, and she can’t watch in her underwear.  All very good reasons….but lacking the power to persuade me from still going. I love how being in a theater with the big screen and the dark room can really transport me and block out the world. I can really live the movie. This could be another reason I don’t like scary movies. Who wants to be IN the movie? No thank you. I would be the first to die. I’d be like “Guy” in Galaxy Quest. Just a filler to carry the rest of the surviving cast to the end. Fodder for suspense.

In spite of our big movie difference, my sister and I have a lot in common. We both have embraced our dark hair and eyes instead of selling out to the blonde world. (No offence ‘other sister….just sayin…) We both love yoga and kittens. (not at the same time….) We both have issues with our boyfriends. We both have a somewhat strange sense of humor at times. I will give her the nod for being a bit more weird than I am in this area, but I do enjoy a good laugh with her. She is the one I can send disturbing, yet funny, pictures to on her phone. I always know I will get a clever response back and almost always a word of gratitude for enriching her day. She makes me laugh whenever I am with her.

At the time, I was amazed at how easy it was to search and see pictures like these. I mean, my kids have cell phones with internet access and they could be looking at just about anything they want to. Now, I seriously doubt they would look for the same images, but there are plenty that might cross their minds to look at.  Yikes!

I didn’t think too much about it until I sat down to write tonight. As I have mentioned before, when I write I usually have some sort of a thought in my head and I take that and go to pictures first. I search for a picture that I like and then I start writing. I put in ”images of …” and was going to type ‘frightened people’ …..when the little search bar dropped down and gave me some very helpful suggestions. Lo and behold, one of the suggestions was ‘images of herpes.’ Wow….I was thinking, that’s really out in left field…And then it happened. Yes, I hate to admit it but I let my sick curiosity get the best of me and I clicked on it. Lucky for me, it just brought up websites and topics. Whew! No pictures! I decided to move on and do the search I really wanted to do so I clicked on images at the left. Yep, you guessed it. Jokes on me. Instead of opening a new area to put in my search topic, it brought up pictures of herpes.

I do believe I am scarred for life. The images that showed up were some of the sickest things I’ve ever seen. I quickly closed it down and started over. Carefully. The internet is a wonderful thing. It makes our lives so easy sometimes. If we want to know something or see something or have just about any question, we can just go to the internet and get all our answers in a blink of an eye. But I tell you what, the internet is also Pandora’s box…just waiting to spring open and throw all kinds of sick, icky, twisted weirdness right in our faces. I feel a mixture of repulsion and sorrow for the people in the pictures. What a horrid disease. From the quick look at them, it seems the disease is something that spreads and distroys flesh in it’s path. Kind of like bad pictures and information on the website. It is so easy to get caught up in the curiosity and to get ourselves involved in looking at things that will eat away at us. I know you know what I am talking about. Its so easy to stumble onto something we shouldn’t.

Seeing those pictures….made me realize how much more attention I need to pay to my kids when they are online. The rule is no computers in bedrooms (except for me) and I have been a bit lax. I laid down the law again yesterday with my daughter about that and her computer is no longer in her room. I don’t think she would purposely look at innappropriate stuff, but things just happen. At least if the computer is out where every one can see it….the chances may be fewer for any of the kids to get sucked into something damaging.

Its a busy, dangerous world out there…..all we can do is try to mark some sort of safe path through the craziness for our kids….and pray.  Cause I said so.