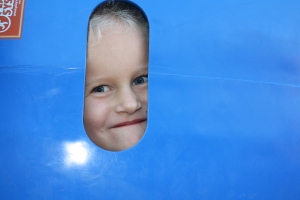 I love Star Trek. At least I did in my former life. When I was first married, Brad and I cut out TV on Sundays, but felt like Star Trek was almost gospel, so we made an exemption for that. Oh, and the Simpsons….but hey, nobody is perfect. It was always amazing to me to see what a future reality could be like. In that future, nobody seemed to care about money or debt or doing laundry. Everyone wore uniforms, regardless of how rediculous they looked, and bald was not only beautiful, it was sexy. Yes, I admit I had a thing for Captain Picard. To me, he was way more desirable than “number one”….I don’t go for arrogant guys. The episodes that I remember the most are the ones with a character called “Q.” He was some sort of an ‘all powerful being’ that could control everything in the universe and beyond. He always gave the crew of the Enterprise some sort of test or problem they had to work through to prove that humans were worth not exterminating. “Q” was a real pain, but he could do anything and that made him intriguing.

Today, I went hiking with my own personal “Q.” Okay, so, my “Q” is not an all powerful being, but she is pretty darn amazing. Although she is four years old in actual years, she remains two in my mind. Not because of her actions, oh no. She is quite mature. I think it is because she is the last of the babies in our family. She is my niece and she was two when I moved here and joined in her life in a real way, so, she will probably be two for a while. At least, that is what I thought until today. Today we went hiking up to a cave in the desert. It wasn’t an intense hike, only three miles round trip. The path was marked pretty well and there were only a few boulders we had to climb over to get where we wanted to go. It has been frigidly cold here, the highs near 85 at noon, so we delayed our hike start til 1pm. Yeah, we are idiots. But we HAD to get subway before we hiked and we had two 14 year old girls with us that had to look beautiful so….that is when we started out. Thank heavens there was a cool breeze or we would have died. We only carried a small amount of water each so we would not be weighted down, and so we could fully feel the pains of dehydration on the way down. We also used the hike to test the endurance of our puppy, who is actually a full grown dog but….still our puppy. She did great and didn’t fall down with exhaustion til we got home.

As we hiked up the mountain, I positioned myself behind my amazon sister and her small “Q” so I would not look like a wimp for going slow. I figured….small girl, lots of breaks, I can blame her for taking forever up the trail. Little did I know…yes, little did I know that this small girl was going to be the best hiker in our group. I found myself not enjoying her slow pace but trying to keep up with her. She really is one of the cutest things alive….(aside from a chinchilla, but seriously, they are only cute because they are softer than butter…) I was amazed at her endurance.

As we hiked along, “Q” asked a very good question. She asked mom why they had to stay on the path. She could see some of the kids taking short cuts through the switchbacks, and thought it might be a good idea to cut some time and effort off the hike. My sister, the eternal teacher and parent I aspire to be some day, asked “Q” if she knew where we were hiking to.

“well, where does this path lead?” mom countered.

“To the wind cave,” Q answered.

“That’s right. So, if we follow this path, we will get to the cave, right?”

“where do you think we will end up if we don’t follow this path?”

“Not the wind cave,”

I loved her response and it made me think about the conference we had just over a week ago. Our prophet spoke to us and gave us counsel, advice, and direction to follow along our path of life. We know where the path he marks will lead us. It is possible to still get where we want to go if we try some short cuts and blaze our own path, but there is no guarantee we will get where we want to go. And more than likely, we are going to stub our toes on a few rocks and get some stickers in our legs and maybe even get a snake bite. It might seem like the short cuts are more exciting and quicker and even easier at times, but are they worth it?

“Q” is a bit young for deep gospel principals, but she isn’t too young to teach them. Her innocent, trusting question helped me to remember how blessed I am to have the path marked for me. Sure, there are times when there is a fork in the path and one choice may lead me around the back of the mountain instead of down to the parking lot, but I know that as long as I stay on the path I am going to be okay. A longer path may not be what I think I want, but sometimes….the best scenery is seen when you are right where you are supposed to be. Stay on the path…..its worth it….cause I said so.

One thought on “Q the Teacher”

writes a short story every week