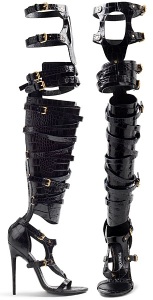 I experienced a real life ‘people of WalMart’ sighting last night. It was out in Queen Creek, so not too surprising…..but still. It was pretty fantastic.

I was innocently walking/running through the store to get the ‘few’ things I still needed for craft camp and I happened to see some amazing shoes. These were what one might call…epic shoes. They were black, shiny, high, and had buckles that went up to the knee. Boots, you say, so what. No, these were not boots. These were …..bondage shoes. There was no other word for them I’m afraid. What was the woman wearing with these? You might ask. A black dress? Mini skirt? Something …..sexy? No, not really. She was wearing sport shorts and a long sleeved white peasant shirt. Buttoned up to the neck. The outfit made quite a statement on it’s own, but the part that really made it a ‘people of WalMart’ moment for me was that she was shopping with what I can only ‘assume’ were her two small children. They didn’t seem bothered at all by what ‘mommy’ was wearing. No doubt, this is also what she wears when she vacuums the house on Friday night before poker.

See how judgmental that was of me? After I scurried out of the store, laughing to myself about how glad I was I didn’t have shoes like that to tempt me into WalMart shopping, I realized I knew nothing about this woman. Maybe….she is a single mom, trying her hardest to support herself and her kids and the only job she could find was as a ‘shoe-breaker-inner’ for…(not sure what kind of person wears those shoes….) a bondage shoe wearer.

Or maybe, she came straight from work as a….bondage shoe model and didn’t have time to change before she picked up the hamburger helper for dinner.

Or maybe, those shoes are incredibly comfortable and she just loves them.

I don’t know what her story is, but I’m sure she has one. Don’t we all have our story that other people don’t see? We walk around doing our thing, not really caring or realizing that other people are seeing us and building a story up about us by what they see or hear. It’s kind of not fair.

Maybe the reason that mom was walking around Ross(dress-for-less) holding her screaming child upside down while she quietly looked at dresses was that the child had a medical condition that required blood to the brain and screaming to fix.

Maybe the reason that cashier at Best Buy is so darn abrupt, crabby and just MEAN is because she has teenagers at home that are driving her over the edge and she is stressed out beyond words.

Maybe the reason that idiot in the Ford Blazer cut in front of you on the way home and made you slam on your breaks and almost put your daughter through the windshield (because she hates seat belts) is because his son had cut his arm off and they were rushing to the hospital.

Maybe the reason your girlfriend checks her ex-boyfriends Facebook page now and then is because he has written some horrible things about her on there in the past and she is just trying to protect herself from an onslaught of vicious rumors.

Maybe the reason you can’t sleep at night is because not only are you not prepared for craft camp tomorrow, but you also forgot you left a gallon of milk in the car, and it is slowly turning to poison.

Maybe the reason I am so stressed out and frustrated is because I care too much, try to hard, and get knocked down too often. Maybe we all feel that way. What if we could see everyone’s full story when we first met them? Would we run away screaming in terror? Or would we simply wrap our arms around them and hold them. I guess it depends on what kind of person we really are. Kind? Patient? Caring? Or…do we really enjoy our single story life?

As for me, I never liked living in a one story. It’s boring and confining. I much prefer taking the time to take care of a second story. One of these days, maybe I’ll even go all out and add a basement….and really get the root of the story. Cause I said so.

One thought on “Single story”