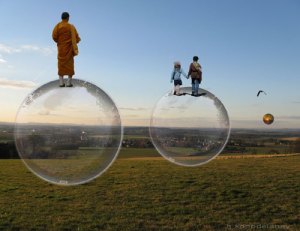 I have had some weird dreams in my day. (or night)  I remember when I was pregnant with my first child. I used to have dreams about having a monkey for a baby. It was disturbing, remember how I feel about monkeys? I even had a friend that didn’t help with my fear. He was a hispanic man who told me about when he had his first child. He was in the delivery room when his wife gave birth to his daughter. When the baby came out, he tried to give it back to the doctor. He said he was sure his wife had a monkey by mistake because it was so hairy. He went on and on about how ugly the baby was and how monkey like it was. The doctor finally convinced him the hair would fall out and that it was actually his daughter. They took the baby and went to the mall on the way home from the hospital because they hadn’t gotten a thing for the baby. It was a funny story, but I think it disturbed me and fed my weird dreams. As a side note, his daughter grew up to be one of the most beautiful girls I’ve known. Go figure.

I had a boyfriend in high school that was into dream interpretation. He would read and reread Freud’s ‘Interpretation of Dreams’ and try to analyze what my dreams were about. I honestly don’t remember a thing he said…probably because I’ve all but blocked that whole relationship….but I do wonder if I should read that book myself sometimes.  I do have dreams about Brad now and then. The dreams of Brad usually include him being alive and coming to the house and telling me how much I’ve messed everything up. He claims he has been alive the whole time and that he finally came back to fix my mess. The dreams are really uncomfortable….especially since I am engaged to another man now, and I end up waking up with a huge feeling of guilt and even anger. I don’t like those dreams much. Life is stressful enough without having things stress you out even more while you are asleep. It hardly seems fair.

Last night my dream was kind of weird and without any real obvious cause. I dreamt that I was living in a one story house under a lot of trees, with a dumpster in the back yard against the house. Already weird….dumster? Anyway, I was out back by the dumpster and I saw a full grown tiger getting ready to pounce on me. I remembered, in the dream, just learning about how fast tigers can move and how futile it can be to try and fight one off. I grabbed a long vent tube….(like the kind air conditioners use?) and some how used it to lure the tiger into the dumpster. I know, clever and sooo believeable. After trapping the tiger in the dumpster, I herded all my kids into a room and told them to be quiet. I then went and sat in the living room with a bunch of people and listened to them visit and talk while I watched the hallway, waiting for the tiger to get out. I even told the group that there was a tiger and if I suddenly ran from the spot…they should probably get out. Oh, I forgot that I did call animal control on my cell phone as soon as I ‘locked up’ the tiger. I guess I was waiting in the living room for when they arrived.

The tiger got out and came strolling down the hall so I took off into another room and snuck out through the window. I then went to the room where my kids were all hiding and had them climb out the window in there and onto the roof. We waited on the roof for the animal control to come and take care of the tiger. In the dream, my kids were all younger than they are now.It seems weird to me that I didn’t take my kids and get the heck out of town instead of hiding and waiting for the tiger….

I don’t usually remember my dreams like this. I am wondering if there is some deep meaning to all of this craziness. Part of it may be that I had a raging, and I mean RAGING headache when I wen to bed last night. It was so bad I kept feeling my head to see how big the crack was getting. (no crack) 400mg of advil didn’t touch it.  Part of it could be that I watched an episode of the Big Bang Theory before I went to bed. It was the episode where Sheldon decides he needs a cat and ends up getting…seven I think.  It could have something to do with the fact that I had to lock my own cats out of my room when I went to bed because they were running around like wild beasts high on crack. Who knows, I was probably given some deep meaning message that I will stew over and not get until my brain power is seduced by something more tangible like….driving my car or avoiding a donut. I wish sometimes that when I went to sleep I would be shown a specific diagram or outline of what I am supposed to do the next day, or in my life in general. I mean, wouldn’t that make sleep more interesting and useful? If we woke up each morning with a clear plan of what we were supposed to do that day….life might be a bit easier. Instead, I woke up with a fear of tigers lurking in my laundry room and the need to check the ability of all my windows to open. I’m also going to order some vent tubes and a large dumpster for the back yard. I mean….you never know……cause I said so.