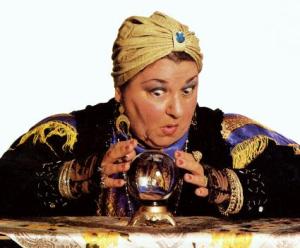 I don’t believe in fortune tellers. I don’t believe in soothsayers, and psychics and all those people that claim to be albe to see the future or talk to the past or any of that. Its all a bunch of hulabaloo if you ask me. Still….they do have amazing outfits. I mean, seriously! The maxi skirt at its finest. Earings to die for and….a jingle when you walk? Please! Sign me up! I’d prefer to look like Esmerelda from The Hunchback of Notre Dame instead of the gal I have pictured here. Especially if my hair stayed smooth and tangle free even after dancing up and down a pole.  Hey, a girl can dream.

I’ve always said I lived in the day and didn’t want to know the future or dwell on the past. If asked the question, “If you could go back and live your life over would you do it differently?” I have always said no. It is just a great paradox if you start changing things. If I went back and did one thing differently, everything else would snowball into something different. Call it the butterfly effect, or Chaos. You can’t just change one thing. I’m basically not smart enough or good enough with that kind of strategy to figure out which one thing would cause me the best butterfly in the end so, I stay with what I have.

All that being said, it would/could be nice at some times to be given just a glimpse of what my future is like. I have found that since Brad died, I don’t have a very long term view anymore. It used to be my ‘dream’ that Brad and I would raise our kids, they would move out, we would go on missions or serve in mission presidencies or something cool and service-like like that. I remember being in a fireside in Florida one day years ago where an older couple was speaking to us. I looked at the woman and my heart said, “That will be me one day.” I looked over at her husband expecting to feel the same about Brad but…it didn’t come. I didn’t think much of it at the time. Maybe I was upset with him or something, but now I remember it clearly and wonder if that was a glimpse? Was the Lord preparing me for him not being around into our old age?
I have had glimpses in the past. When I was 15 I had a dream about a man, two kids, a dog, and a big rock. The kids were running around the rock playing with the big grey dog. The man was tall dark and handsome but, I could only see the side of his face. The dream stuck with me for years, even til now. One day when Brad and I were out on the golf course, before we were seriously dating, he turned and I saw the man from my dream. “It’s you.” I said. He, of course, being the devil’s advocate he always was, instantly said “No it isn’t” before even asking what I was talking about. But it was him.

After we were married a while, we had a grey dog….and two kids. A boy and a girl. Glimpse.

I’m in a new place now, a new life that is different and not at all what I expected. Sometimes I stand back and look at it and wonder what the hell is going on. Who am I? I think of that song, “This isn’t my beautiful wife, this isn’t my ..”whatever. I forget the words, but you know the song. “Days go by” by….talking heads I think. I never loved the song, but lately it speaks to me and I look around in wonder. Where am I? Where am I going? I wish I would get another ‘glimpse’….anything. even a road side would be nice. I don’t think I’m asking for much, just a little hint that I’m going in the right direction would be nice. I’ve had a hard time finding the yellow brick road, it seems to have turned to concrete, like everything else out here in the desert….cause I said so.